A letter to my fellow Seattle drivers

I want to have an honest talk with you.

It was recently reported in the Seattle Times Traffic Lab that 101 people were seriously injured or killed in 98 collisions on Seattle streets in the first 6 months of the year. That is the highest number in the first six months of a year since 2010.

35 pedestrians and 14 bicyclists were seriously injured. (Oh, and before you ask – most pedestrians and bicyclists are killed or injured while they are obeying the law.) Collisions between motor vehicles injured another 38 people.

Many believe that the use of smart phones is, in part, to blame. Not only from the prospective of those behind the wheels of a motor vehicle, but, also by those on foot and on a bike. But the fact is, many U.S. cities – including Seattle – have been designing around automobiles for many decades. Street design that favors individual cars inherently endangers all other road users.

Traffic professionals claim that two of the most important tools for reducing serious crashes are:

Our vehicles cause the most damage.

No matter the cause of these crashes, they all have something in common. Seattle drivers, it is our cars and trucks that are doing the most damage and harm. Your vehicle is a tool that moves you around in the world, but, it can also be a weapon.

I have represented crash victims and their families for over 30 years, but this increase in the number of serious-injury and fatal collisions has me greatly concerned. Moreover, typically more crashes tend to occur in the second half of the year.

Seattle, I’m scared for us.

Naturally, we often focus on the injured person – but crashes have a big effect on the driver, too. I have spent countless hours questioning at-fault drivers in depositions; most of them would tell you that they would do anything to go back and change their actions.

The good news, Seattleites, is that we can do better.

After reading Traffic Lab, I sat down and made a list of my recommendations for reducing crashes caused by Seattle drivers. Here is what we can do, and should do, every day.

As the driver, these things are all 100% within your control.

I believe we can  – and must – do better, Seattle. 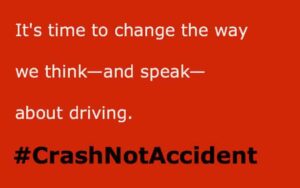 P.S. We don’t use the term “accident” at Coluccio Law: it is our position that nearly all collisions are avoidable, and could be prevented with safe driving.

Try it. Use “crash” or “collision” instead of accident.